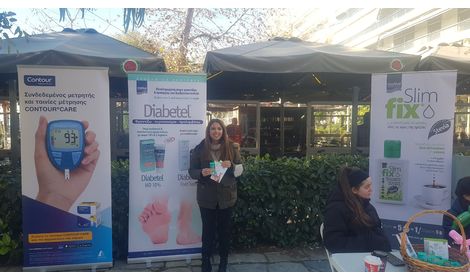 After a two-year forced absence due to the pandemic, AMKE's "Diabetes-Driven Magic Bus" returned just before Christmas 2022, and InterMed was there to support it.

The message of InterMed- company of OFET (Tsetis Pharmaceutical Group of companies) and also of the Magic Diabetes Bus, which went out in the streets and squares of Attica, was about informing and raising awareness among people with diabetes.

InterMed participated with the Diabetel series for the diabetic foot and with the Slim fix formulation - liquid sweetener with stevia.

From December 18 to 23, 2022, the Christmas decorated bus – Magic Diabetes Bus, transformed into a fairytale, informed, but also entertained young and old who visited it.

As well the adults and seniors, had the opportunity to measure their glucose, learn about diabetes and vaccination and have their questions answered by the scientific team consisting of a diabetologist, nutritionist and podiatrist. We should not forget that patients with Diabetes are much more vulnerable to infections than their healthy peers."