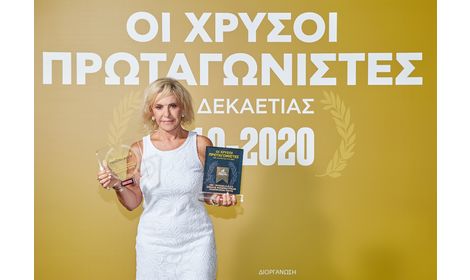 LEADERS OF THE GREEK ECONOMY 2021: 4 significant Awards to Uni-pharma & InterMed!

The industries of Tsetis Pharmaceutical Group of Companies, Uni-pharma & InterMed, received four important distinctions, in the event "LEADERS OF THE GREEK ECONOMY 2021", which organized for the 6th time by the Direction Business Network, on July 19th.

The companies that stood out for their financial performance in the decade from 2010 to 2020 were honored at the Awards Ceremony-institution for Greek business.

The awards were based on the official financial data of the companies as reflected in their financial reports and are presented in detail in the publication "The Strong of the Greek Economy" of the Direction Business Network, which has just been released and is also dedicated to the decade 2010-2020.

Also awarded were the Greek Business Champions of the Decade, companies that managed to simultaneously increase their turnover and profits before taxes by more than 50% comparing the financial year 2010 with that of 2019. These include Uni-pharma & InterMed , while among the four distinctions received by OFET, is the "Solidarity Excellence Award". With this award, companies were honored for their commitment to the value of human life and their solidarity with society in practice with the advent of the Covid-19 pandemic.

The awards were received by the President and CEO of OFET Mrs. Ioulia Tseti, the Head of HR and CSR of OFET Mrs. Smaragdi Talaki and the Corporate Development Manager of Uni-pharma Mr. Spyros Kintzios.